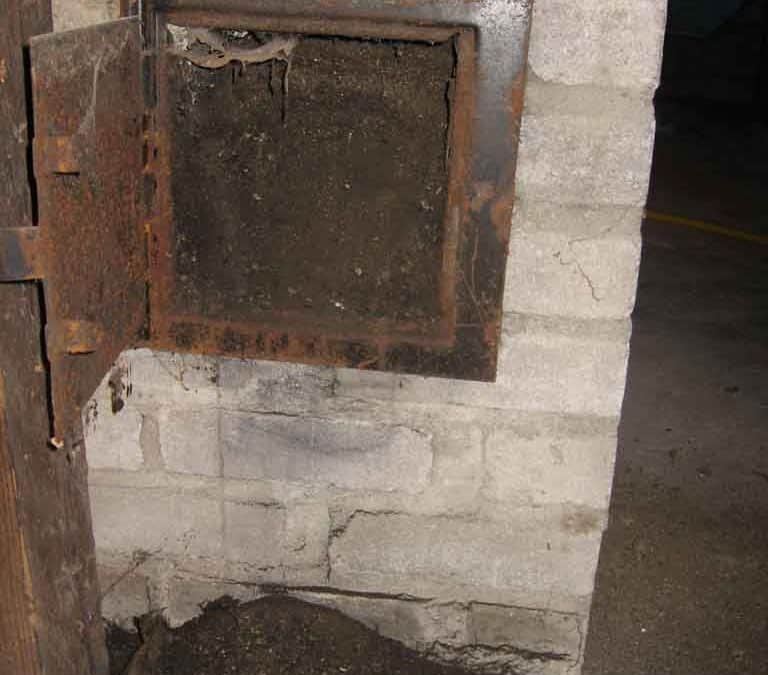 Today my dad and I cleaned out the chimney. The process was really simple (but dirty!), only took about 30 minutes, and cost no money whatsoever.

Umm… why are you cleaning the chimney again?

When I first purchased the house, there was a big pile of dirt behind the furnace (right below the chimney trap door).  I cleaned up the pile when we painted the basement floor, and honestly haven’t thought much about it until about a month ago.  We had a big rainstorm, and when I came downstairs to do laundry, the mysterious pile of dirt was back!! Not only was it back, but it looked like it had been wet (errr… mud) and streamed across the ground into the floor drain. Once I saw this, I realized that the mysterious dirt pile could potentially cause some problems down the road for me (clogging the floor drain).

While still not particularly concerned about it, our curiosity got the best of us and we set out to figure it out.   We were able to stick a mirror into the chimney through the trap door and see all the way to the sky outside, so we’ve known for awhile that the chimney isn’t blocked or deteriorating. So, where is this dirt coming from? Turns out, it’s coming from the chimney pit — the place that catches the dirt and gunk that may come into your chimney from the furnace or the roof. It  was completely full, so every time it would rain, and mud would come down, instead of being caught in the pit area, it was overflowing out of the trap and onto the floor behind the furnace. Too funny… it was just really dirty and had never been cleaned out.

After shutting off the furnace, we got a 5 Gallon bucket, and some recycled soup cans, opened the trap, and scooped the dirt out and into a bucket. We scooped… and scooped… and scooped… about 2.5 gallons worth of dirt out of the trap. Then we took the shop vac and sucked out everything in the bottom.  Trap cleaned! Honestly, I don’t think that it was EVER cleaned, so this build-up was probably based off the house’s age of 50+ years.

It’s unlikely I’ll have to clean it out again in the near (or far) future. But, it was very easy to do. And that 30 minutes of work and sheer curiosity saved me from a filthy floor during every heavy rainstorm, and the potential for a blocked floor drain from all of the debris draining into it.

You should check your chimney too — just see what’s in there — and spend a few minutes cleaning it out if needed. It may save you a headache in the future. Or maybe not, but at least you can feel accomplished and get ridiculously dirty in a really short amount of time!