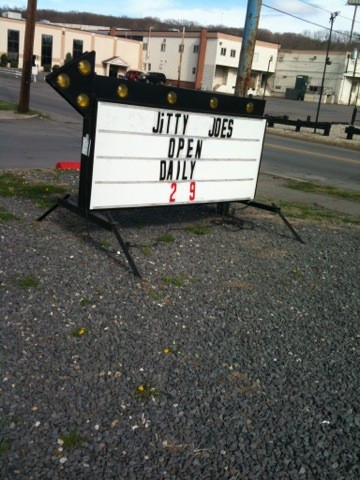 Today Roxy and I took our first walk to Jitty Joes, a local icecream stand that’s about a mile from my new house. Although the round trip is less than 2 miles, I was a little skeptical bringing my big pup… as most of the walking is on a busy street and I wasn’t sure if there were sidewalks the entire time. Turns out, getting there was much easier than getting home. There were sidewalks about 85% of the time, and enough grass and paths that we managed. When we were almost there, we were able to cut through a couple fields to come in through the back.

Once we hit the parking lot Roxy welled up with excitement like a little school girl. I swear she is human sometimes, and somehow knew that this was going to be a special treat. She waited patiently with me in line behind 3 others, and graciously accepted pets from fellow icecream goers as we waited.

I ordered a twi

st with chocolate sprinkles in a cone for me, and a baby sized sugar free vanilla for Roxy. She was very lucky, because apparently baby sized icecream at Jitty Joe’s is about a large anywhere else. Next time I will have to ask for half of a baby size. I was a little disappointed that they didn’t put a bone in the icecream. Growing up, my first job was at an icecream stand called That Shake Place in Mount Cobb. They definitely had a special icecream especially for the puppies complete with a milkbone on top. Nevertheless, the staff was very accommodating, and Roxy and I sat at the picnic table and enjoyed our snack. I put the cup between my feet and she dug in. Once I got my cone under control I tried to hold hers for her, but she seemed to think I was going to take it away from her, and grabbed the entire Styrofoam cup away from me and continued struggling with it on the ground. By the end, the cup was in about 4 pieces and she was trying to eat it. Good doggie.

The walk back was a little more difficult as it was straight uphill. There doesn’t seem to be a connecting way to go without using the main drag of Moosic Road until you get about .5 mile from my house. We cut over one block and went through Old Forge cemetary and stopped at a spicket to get the pup a drink.