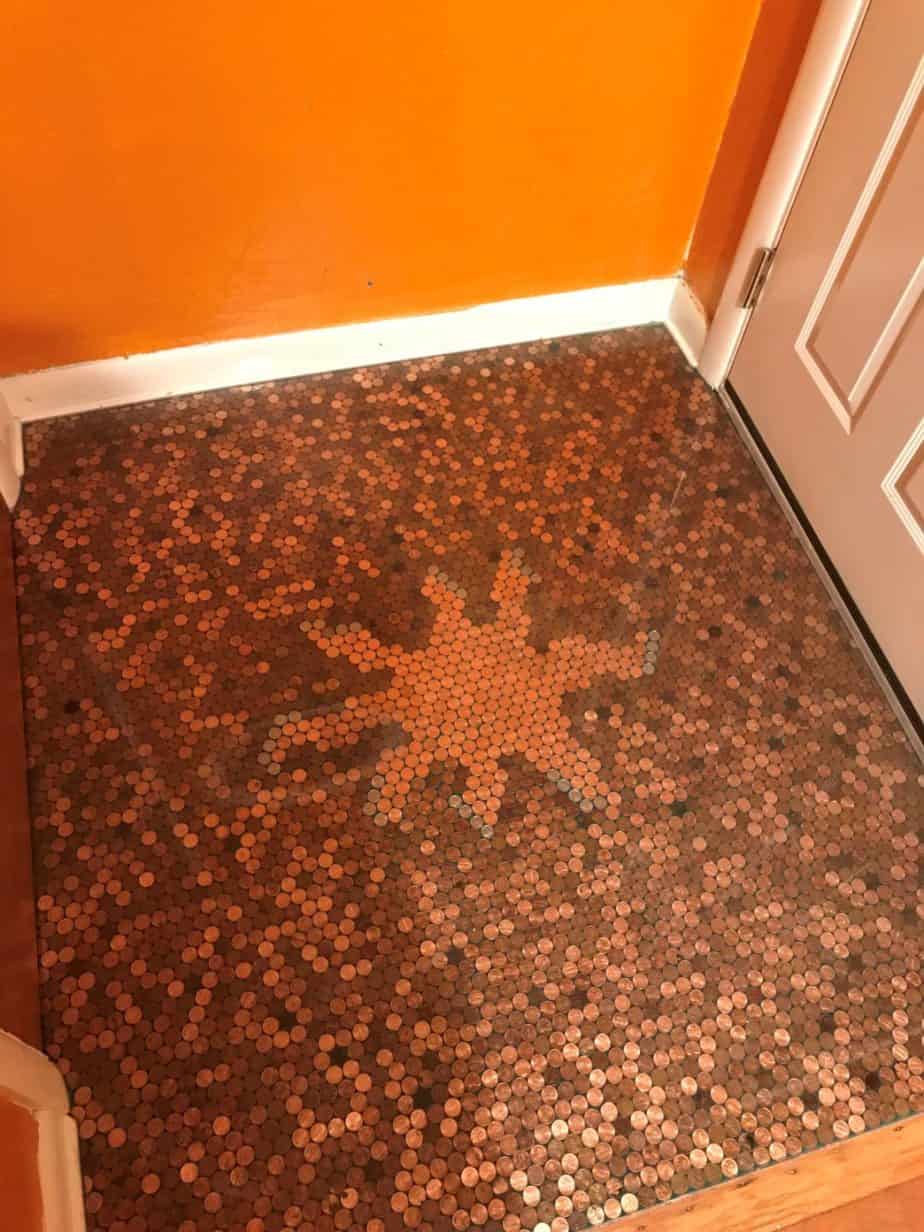 Michelle decided to make her 4 x 4 foot foyer floor into a penny floor.  She has a lot of “suns” in her house so she thought making a sun would tie everything together. Michelle used newer, shiny pennies, all heads up for the sun. Michelle made the sun design on a board and when she was happy with it, she put a piece of clear contact paper over the design so she could transfer it to the floor.

Did you make a penny project of your own? Submit your photos to get your own feature in our newsletter and on the website!

Michelle ran into a few problems during the installation. At first, she just put down the pennies in no particular order wanting it to look more organic. That didn’t seem to work for her as there were too many big gaps between the pennies. So after she glued down about 1/4 of the background, she pulled them all up (except for the sun) and decided to lay them closer together so the pennies interlocked with each other.*

When Michelle got to the sun, she found that the gaps were also too big between the sunrays. So she ended pulling up each penny one at a time and adjusting it so it would line up with the others. After she was finished she used tin snips to cut pennies to fill in around the perimeter.

Next, Michelle used a dental pick and picked out the excess adhesive from between the crevices. She used green grout instead of the usual black or brown because she likes the look of copper with verdigris when the copper begins to patina.

*Just a note: using the penny floor template (purchase below) would eliminate this problem from happening to you!

The scariest part for Michelle was putting the epoxy down to seal the floor. She had to make a dam so it wouldn’t flow onto the hardwood floor on two sides of her penny floor. She also had to figure out how to make the area at least 75 degrees (Fahrenheit) for 72 hours in order for the epoxy to cure. She decided the best way to do this was to hang a drop-cloth from floor to ceiling using tension rods to keep it nice and tight. Then, she left a space heater inside this area for 3 days so that it would get to the right temperature.

Michelle says that if she were to do this again, she would seal the floor first before putting the epoxy down because the grout was actually much brighter before she sealed it.

Ready to get started? Download the penny template now!

I’m Amy and I help beginner gardeners design impressively beautiful gardens that bring color to your landscape all four seasons, show off your personality and suit your lifestyle. Read more...