Please note: I may earn commissions from qualiying purchases if you shop through links on this page. More info. 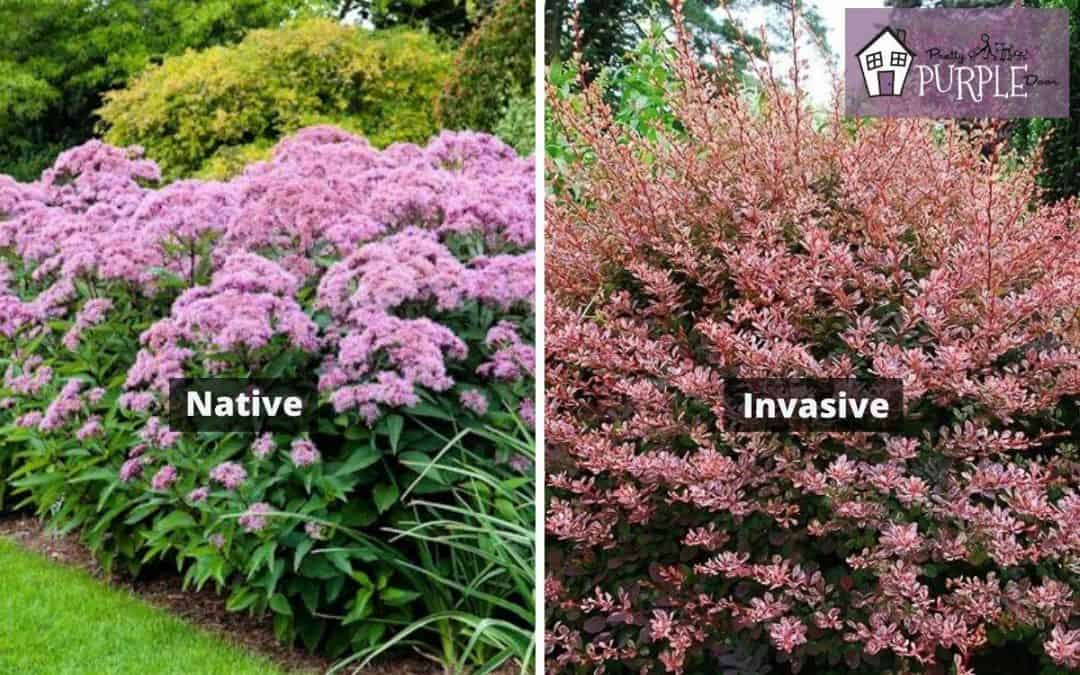 If your new to gardening, you may not even know what a native plant, a non-native plant or an invasive plant means!

And, to be honest, I didn’t know either when I was new to gardening.

While I’m not an expert on the topic, I believe that it’s important. That’s why I’ve educated myself to understand the differences. And, I hope to break this down for you in a simple way and also provide you some resources to continue your research and understanding of native vs. invasive plants.

Native plants are plants that belong in the particular region that you live in. That means they grow there naturally, provide habitat and food for wildlife and don’t cause any harmful effects on the environment.

Non-native plants are plants that are “brought in” to your region in some way; by a person, by accident, etc. If it weren’t for this action (whether it was deliberate or not), they would never be growing in your area.

Invasive plants are always non-native plants. Sometimes, when non-native plants are introduced to a new habitat, they can “take over”, causing a lot of problems for your local ecosystem. This includes negative affects on wildlife, insects, forests, trees, plants… and much more. In short: they are bad news.

Now that you understand the basic differences, lets learn a little bit more about native and non-native invasive species.

A native plant is one that occurs naturally in a particular region, ecosystem, or habitat without direct or indirect human intervention. Native plants include all kinds of plants from mosses and ferns to wildflowers, shrubs and trees.

Native plants have adapted over long periods of time with the regions soil and climate and in tandem with other native species like plants, animals, fungi and bacteria. Native plants exist as part of naturally-forming communities and have an important ecological role to play.

The significant difference between native and non-native plants is that native plants support native insects. Insects that have evolved with native plants can combat chemical defenses of some plants and know to avoid the ones they cannot. But when non-natives are introduced, insects often cannot use them for food.

There are also many insects – at least in the larva stage – that can only feed on one specific plant or a small number of plants. The monarch butterfly is the perfect example. In its larva form as caterpillar it ONLY consumes milkweed (Asclepias tuberosa).

By adding some native plants to your garden, you are supporting native wildlife at all stages of life. So, if you want to attract bees, butterflies or birds to your garden, the answer is to plant some natives. Once you do that, you’ll see your garden almost immediately transform into a vibrant, dynamic space! It truly is amazing.

Native plants are adapted to the growing conditions where you live. Because of this, they are often easier to grow, require less maintenance and are less susceptible to challenging conditions than non-native plants . There are many benefits to planting native plants in your garden:

Natives AND non-natives both provide shelter and food for wildlife

Non-native, non-invasive plants can ALSO provide shelter, nesting opportunities and some food options for wildlife. However, native plants generally support a greater diversity and number of wildlife. This includes the bees, butterflies and birds we love to see in our gardens.

Native plants can also be aggressive

Some native plants can also be vigorous growers that can cause many issues. But, the proper term for these plants is aggressive, not invasive. Some gardeners call these more aggressive plants the “thugs” of the garden.

An invasive plant is a non-native plant that negatively impacts the region where it’s been introduced. Because invasives are non-native, they have been introduced to the new region, usually by direct or indirect human intervention. In other words, they don’t grow there naturally.

Invasive plants can reduce populations of native plants and the insects that depend on those plants… and even the animals the feed on those insects, etc. Over time, invasive species can permanently alter your local ecosystem functions.

The label “invasive” is reserved for non-native plants only. A native plant can be aggressive… but never invasive if you are using proper terminology. However, lots of people mix this up so just be aware of that!

Invasive plants have far-reaching and long-lasting impacts. When invasives take over, it’s really difficult, if not impossible, to control or remove them. This is especially true if the invasive plants are established over large areas. Invasives disrupt both natural and urban ecosystems. They are problematic in other ways, too:

There are many misconceptions and misunderstandings about invasive plants so I wanted to cover the major ones.

Invasive plants aren’t bad plants… they just aren’t suited for the environment they were introduced to. When that particular plant is in its “native” region, it may be a great plant.

Plants aren’t bad. It’s the conditions that the plant was introduced to that are causing the problem. Often times when a plant is introduced, what’s NOT introduced along with it are all of things that kept the plant in check back where it came from. These are things like insects, disease, predators and other natural controls within its native environment. So while that may be a fine plant where you live, where someone else lives it can wreak havoc. Make sense?

People who mention to you that a particular plant is invasive are not trying to hurt your feelings. They are not talking smack about a plant you like. They are simply stating a fact… and it’s a fact that’s non-negotiable. It’s not up for argument.

Some cultivars of invasive species plants are safe for your landscape

It’s true. Horticulturists are always trying to create cultivars of beautiful and desired invasive plants that are safe for the environment. Usually they do this by reducing the fertility of the plant so that it doesn’t seed and spread as profusely.

However, proceed with caution. Without years of research to back up these claims, it’s been found that some of these cultivars with “reduced” fertility will often still be invasive. Dr. Tiffany M. Knight is an expert in field of causes and consequences of exotic plant invasions. In an article from BioScience, a journal of the American Institute of Biological Sciences, Dr. Knight states that,

“…reductions of even 95 percent in the number of viable seed will leave a long-lived species quite capable of spreading — and many of the new cultivars do not achieve even that much of a reduction.”

Dr. Knight notes that only completely sterile cultivars can be considered truly safe without further testing and recommends a “conservative approach” when it comes to using these cultivars in your landscape. She adds,

“A cultivar should be considered guilty until proven innocent. And horticultural scientists should conduct more thorough breed and demographic studies on cultivars so that they are not marketed as safe before the science is complete.”

Not all plants that you pick up at the garden center are created equal, my friend. It’s really unfortunate to know that garden centers and nurseries commonly sell invasive plants right along side of the native ones. Here are just a few common invasives you’ll see:

So, it’s up to you to learn the difference between the two. Armed with this information, you can practice your gardening hobby in a more thoughtful manner. And, you’ll also be able to contribute in a positive way to solving global challenges like climate change and biodiversity loss… which is a really cool and exciting thing to be a part of.

Another common misconception is that if a plant is considered invasive in one region (like the state of Pennsylvania), it must be invasive everywhere else (like South Carolina, Texas, Florida, etc.).

This simply isn’t true. Conditions vary wildly from region to region. A non-native plant that’s capable of swallowing the South may be incapable of spreading very far in the North, and vice versa. There are many factors that can cause a plant to be invasive in one region and not another (like climate in this example).

I know… it can get really confusing. So, you need to always do your research!

Not all non-native plants are invasive

It’s important to understand that the majority of non-native plants are NOT invasive. Many nonnatives are beneficial to society and non-threatening to native biodiversity; others are benign. Only a few are invasive.

Head over to the article Is Non-Native and Invasive the Same Thing? to learn more about the differences between non-native and invasive plants.

What you can do to curb the spread of invasives

None of this information is helpful if I don’t provide you with some action steps to take, right? So, if you want to be a part of the solution rather than the problem, here are some things you can do:

You’lll have to do your research in order to determine whether a particular plant is invasive in your area. A great place to start your research is on the USDA website’s Introduced, Invasive and Noxious Plants page.

You can also find a State and Master Gardener Extension Program near you so you can talk to an expert in your particular region.

In addition, most state government websites will also have regional resources available to you. Check for the .gov at the end of the domain name for these resources.

Hey, since you're already signed up for my emails, you may be interested in my Free Gardening Secrets video training.